Of all the things Apple introduced at its latest media event, the one that sticks out to me the most is not any iPhone feature. It’s not Apple TV and it’s certainly not anything to do with the watch.


It’s not because it gives Apple control over a massive supply of second-hand iPhones they could resell at lower prices to lower-income markets and demographics (although it does).


No, the real genius of the Apple payment plan is that it increases iPhone lock-in by an order of magnitude. Now, once you go iPhone, you will never leave.


You see, Apple has made it so you can get a new iPhone (and AppleCare+) for a reasonable $30-ish a month. It is over the course of 2 years, although Apple will let you get the new iPhone when it comes out every year. Of course, at that point the 2 year clock resets. Now here’s how it means you’ll never leave:


Let’s say it’s November 2016. You’ve had your iPhone 6S for one year (with one year to go on your payment plan). The new fall range of smartphones comes out, including (I’m going out on a limb here) the iPhone 7. What are your options for the next year? 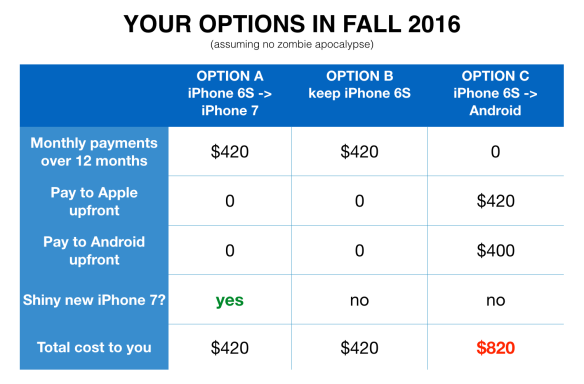 Who *wouldn’t* sign up for the shiny new iPhone?


And here’s where it gets positively diabolical:


Let’s say you want to switch to Android. You have to pay the cost of the Android. And you have to pay Apple the remaining $420 you owe on your old iPhone payment plan. Apple has now erected a $420 moat around leaving Apple.

Let that sink in: Once you’re in the Apple payment plan, it is more expensive to go to Android than to stay in iPhone.


And that of course is on top of losing iMessage, your apps, the approval of your hipster Apple friends, and whatever other digital ecosystem lock-in Apple has put in place by then.


Once you go into the iPhone payment plan, you’ll be using an iPhone and giving Apple money until the day you die.

Not bad. Not bad at all.