In what will hopefully be the first of many “Metro++” blog posts on improving the Metro experience, I wanted to focus on discoverability of functionality. One of the weaknesses in Metro as it now exists is that the emphasis on typography instead of chrome means that it isn’t always clear when any particular piece of text is meant to be clickable and do something, and when it is meant to simply be read. This has two negative consequences: 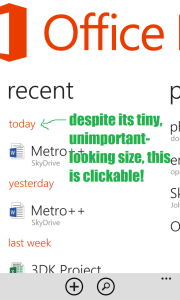 Case-in-point. I only accidentally discovered that header was clickable

Now, how can Microsoft (or an OEM with some significant rights to customize the OS) solve this problem?

What it would look like to button-ize everything: a cluttered mess

I think the solution is right under our nose…or somewhere between the nose and the screen. I am of course referring to the hover!

Hover (or onMouseOver) rose to prominence in the early-ish days of the WWW as a mass phenomenon. HTTP websites were a new concept for millions of people accessing the Web for the first time, and much as in Metro today, there was some confusion in what text was clickable (this can still be witnessed today by watching your parents trying to navigate the Internet). This was solved in two ways:

Of course both of those relied on a cursor, which doesn’t exist in a touch interface. Can we make an equivalent of this “I’m here, but not clicking on it” function in a touch screen?

*with the help of some clever capacitive technology

Capacitive touch screens work by sensing a disturbance in the electrical field around the screen, not just at the immediate glass surface. It is actually entirely possible to sense a finger wandering around above the screen without actually touching it, as Sony recently demonstrated with “floating touch” in their Xperia Sola. And so it is possible to have mouseOver effects in the Metro interface! When the finger is near a clickable block of text, that text could highlight itself in a number of ways, but I think 2 good ones would be:

2. A glowing effect around the actionable text

Any of these would address this discoverability shortcoming in Metro, and also look pretty darn cool and futuristic, which helps sell devices at retail, and adds another layer of sophistication in human-device interaction that would make iOS and Android look a bit dull by comparison. Also in Metro, an added bonus is the ability to have graceful degradation from Touch to Mouse, since the onHover signals can just as well apply to MouseOvers. So, that’s what I’d like to see. Get to it, Microsoft!