While the small sliver of people lucky enough to live in the developed world (perhaps 1 billion of the 7 billion souls now in this world) currently deal with omnipotent smartphones with screens that blur the distinction between smartphones and coffee tables, and ponder just how revolutionary our and social picture sharing apps (with badges!) and this week’s group messaging app are, there is a real revolution taking place in the developing countries that are home to the great majority of humankind. 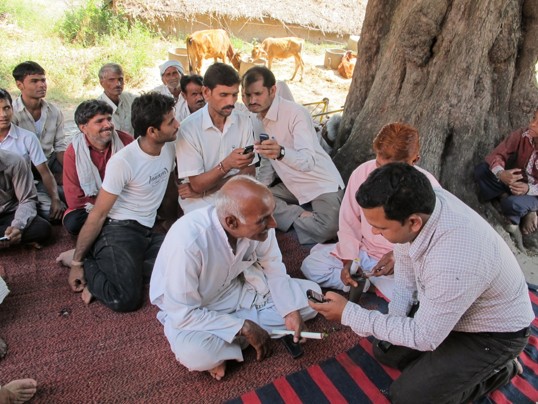 Shafique Khan, right, demonstrates to Ghisi Lal Varma, center, a 61-year old farmer, a new grievance reporting service to use for sending complaints via text message to the government about problems in the village. (Caption & Image credits: Rama Lakshmi/Washington Post)

A recent article in the Washington Post titled “Indians use cellphones to plug holes in governance” gives a glimpse of the sort of wondrous changes that mobile technology is bringing to those who until now had never known the power of connectivity.

“The ubiquitous cellphone, with about 750 million users in India, and open-source Internet platforms are being deployed to ensure that trash is picked up on time, to track bribes and to help people learn English, find jobs and report incidents of sexual harassment on the streets.”

I spent 2 years in India working for one of India’s big companies, and witnessed dozens, if not hundreds of ways large and small that the mobile phone is transforming Indian society. It’s what inspired me to move to Silicon Valley and take part in the revolution.

What’s all the more remarkable is that they’re doing all this with phones like this:

The Nokia 1100. The best-selling single model phone (and possibly any single electronic device ever) in the world

No gyroscopes, no game monetization frameworks, and no $500 iPhones in this revolution–all it takes is the incredibly simple and deceptively powerful tools of voice (remember that?) and SMS. Gradually, as the capabilities of ultra-basic phones grow, these revolutionary services are expanding to encompass GPS and cameras, as is the case in Hyderabad:

The phones may not be smart (yet…), but the people devising new ways to use them sure are.

The Real Mobile Tech Revolution will not be televised…

It will be texted.