Working in the Worldwide Developer Relations team at Palm has made me spend a great deal of time thinking about the pain points in the mobile ecosystem for small, indie app developers. You know, those one-man or two-man shops who are writing cool new apps simply because they love doing it–and aren’t averse to making some money on it in the process.

It’s a challenge to get noticed in a sea of apps of course. And in those happy circumstances when the indie developer’s app does indeed show up in a list of search results (in this case, let’s say I’m searching for “alarm clock”), the indie app developer faces another challenge: 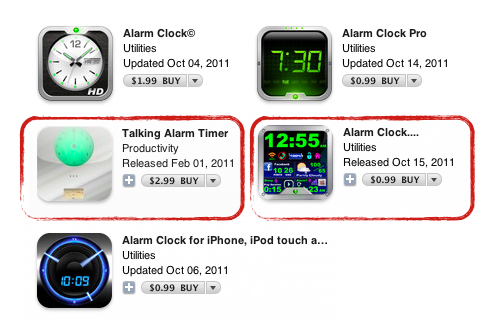 hmmm, which ones am I not even going to consider?

What’s nice about Windows Phone is their Metro design language makes it easy for people who would rather be spending time in the IDE than in Illustrator to still give their app an icon that looks “professional” and congruent with the overall design scheme of the OS, and one that will be given a fairer consideration by would-be shoppers. Observe the hypothetical fart app I made (the result of ~3 minutes playing with shapes stencils in iWork’s Pages app) and pasted into a WP7 homescreen: MetroFart 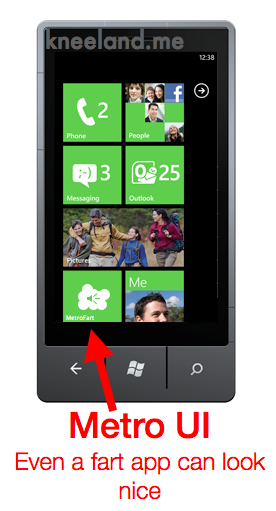 Creating 2-color, high contrast simple line drawings is much easier and faster for someone to pull off than to make an icon fit into iOS.

Those who don’t think there is something to be said for the effectiveness of minimalistic, 2-color designs can take their case up with this guy: 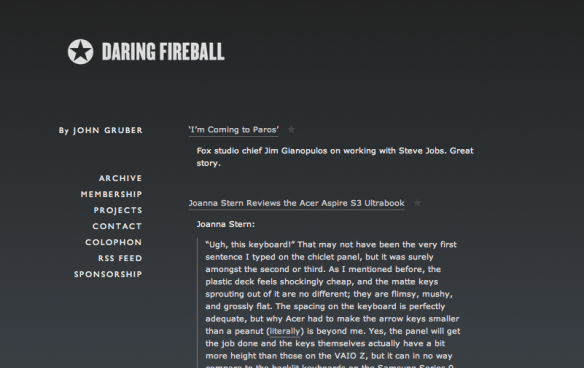 Of course, just because developers CAN make such an icon for a Windows Phone app, doesn’t mean they choose to. As this picture I grabbed from PocketNow makes clear, some developers are opting to go Metro, while others go for a more traditional idea of an app icon: 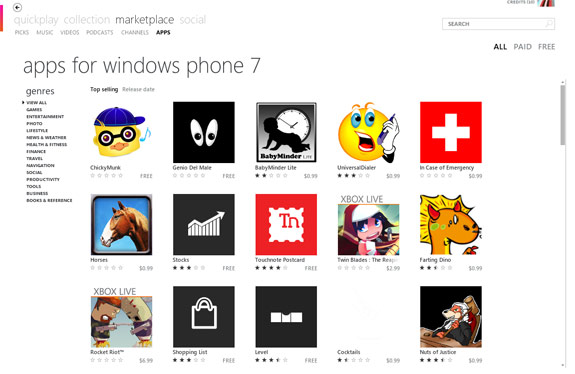 Given Windows Phone’s market position, this is a great solution to get apps that look better without the sort of leverage Apple has. Apple has enough market weight and gatekeeping power to be able simply tell app developers to make a prettier icon or they won’t get in the App Store.* Android has the same weight and gatekeeping leverage (or does it?) to force developers to make nicer icons, but it doesn’t seem to care to. Windows Phone 7 has created an opportunity for those who prefer grepping to gradients to not only make an icon more easily, but one that looks better than something they would have made if left to their own devices (case-in-point: the icons of most Android apps–whose icons, seemingly lacking any guidelines from on high, are of varying styles, shapes, perspectives, etc)

A sample/smorgasbord of Android app icons

I am not saying the WP7/Metro icon solution is better than iOS–it bears repeating that I love the beautiful full-color icons that some iOS developers are capable of creating–rather, it is simply different, equally valid, and exceptionally appropriate for Microsoft’s current position in the market and its need to do whatever it can to be as friendly to indie devs as possible. Microsoft should be applauded for trying something new, rather than going for a bad imitation of iOS icons.

The real question is if Microsoft did this on purpose, or if they simply stumbled into this as a happy result of Metro. Given the considerable number of apps in the WP7 Marketplace with bad icons, I’d guess it’s the latter. Microsoft really should make an effort to push these indie devs toward more “Metro-ish” icons. It’s in the interest of devs, users, and the Windows Phone platform alike.

* While I applaud Microsoft for making it easy for developers to get away without being great designers, I applaud Apple for doing the exact opposite. It is a matter of what role each of these platforms plays in the mobile universe–their dharma, if you will. I’m going to talk more about “platform dharma” (with apologies in advance to Hinduism!) in a future piece.

2 thoughts on “The Design Brilliance, Intentional or Otherwise, of Windows Phone for Indie Devs”